A flurry of activity from fire and police departments outside SM East Monday afternoon attracted lots of attention, but there was no threat to students.

According to the school district: “A chemical reaction occurred inside a refrigerator in a science storage area over the weekend. The local fire department was contacted to ensure the safe cleanup and removal of the chemical. There was no immediate danger to students or staff.”

Parents of SM East students were being sent a broadcast voicemail explaining the situation. There was no evacuation of the school and fire department personnel were in the building when school released at its normal 2:40 p.m. time.

Evening activities for Monday night at SM East are still scheduled to be held, according to district spokesperson Leigh Anne Neal.

Over the weekend the chemical being stored in the refrigerator reacted, creating a mini-blast — about the equivalent of a couple of small firecrackers, according to SM East Principal Karl Krawitz. The door to the refrigerator did not open as a result of the blast. But when the teacher opened the door, there were some fumes, neither toxic or dangerous, so no students were in jeopardy.

The teacher closed the door and notified the office, which resulted in the fire and police notification and the response that drivers witnessed along Mission Road.

The chemical was identified as nitrogen triiodide. 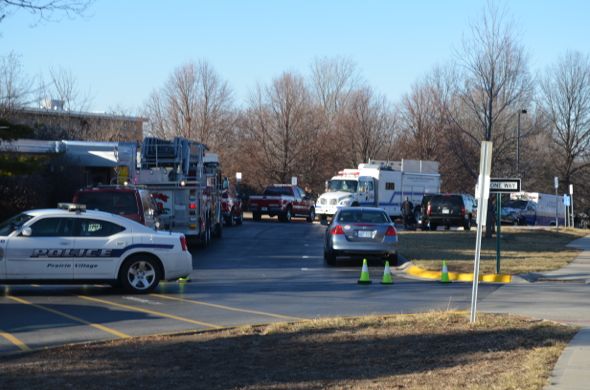