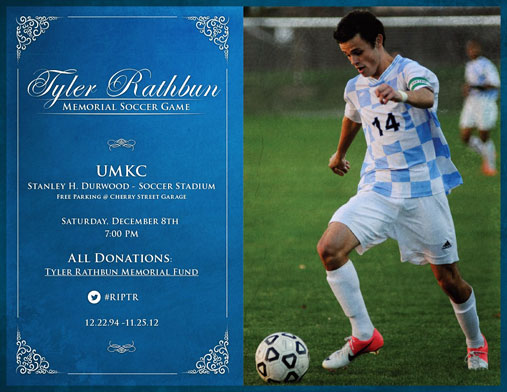 Tyler Rathbun adored soccer — and just a week and a half after his tragic death, his love for and talent in the sport is already a huge part of his legacy.

“Soccer gave so much to Tyler,” Dunn said. “We kind of thought something like this would be the best way to pay tribute to him.”

Dunn said the game will help raise money for a memorial fund in Rathbun’s honor. Though there won’t be any entry fees, SM East cheerleaders will pass a bucket through the crowd to collect donations. Dunn said he expects the money will be used to help a talented young player pay club team dues.

“It would be like a scholarship for a club team for a player who might not be able to afford it otherwise,” Dunn said.

Dunn and Rathbun spent years as soccer teammates, so the news of Rathbun’s death hit him particularly hard. But a week and a half after the accident, Dunn said some of the pain of the tragedy is easing.

“Kids who had class with him, I think it’s been especially tough for them, because it’s painful to see that empty desk every day,” he said. “For me, after the week mark, the hurting started to go away a little bit, and now I’m able to focus more on some of the good times we had together. That’s what this game is supposed to be about.”