SM East students marched from their school down to Village Presbyterian Church Friday afternoon to remember Tyler Rathbun, the star soccer player whose death in an early morning ATV accident has elicited phenomenal displays of condolence from across the country.

Led by the marching band’s drum section and followed by Rathbun’s soccer teammates, hundreds of students made the solemn walk to his memorial service.

The displays of support for the Rathbun family and the SM East community last week became so widespread — including tweets from ESPN’s Jay Bilas and Tampa Bay Buccaneer’s quarterback Josh Freeman — that they attracted national media attention. The Associated Press even published a story noting the way current and graduated SM East students have used social media to help grieve.

The Miami County Sheriff’s Department is still investigating the accident that killed Rathbun. 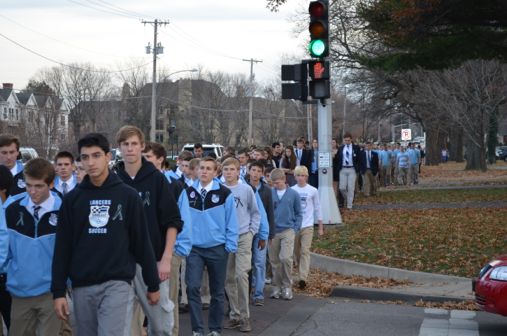