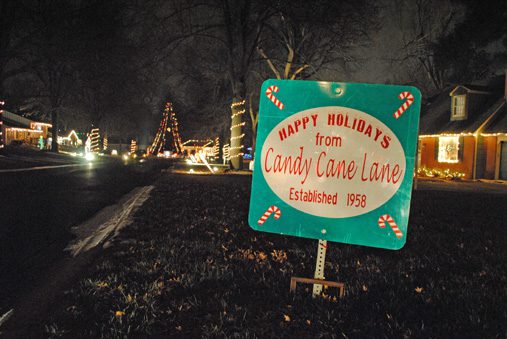 Prairie Village’s new special event permit ordinance may have chilled Mike Babick’s plans to put on his annual display, but organizers of another of the city’s favorite Christmas traditions have received official approval to move ahead.

Prairie Village police this week approved a special event permit for the Candy Cane Lane display that homeowners on the Outlook Lane cul-de-sac off 79th Street have put on for more than 50 years.

Because city resources aren’t expected to be required to maintain public safety at the Candy Cane Lane display, the permit application was approved without conditions or restrictions — meaning homeowners won’t be assessed a cost for off-duty police officers.

“I did have to print it out and drop it off (it would have been nice to submit online). [But] it only took about 5 minutes to fill out,” Braly wrote. “I was very impressed how quickly they responded. I dropped it off [Monday] morning and received an email the same day.”

Candy Cane Lane will have its traditional “Opening Night” Saturday, Nov. 24, when homeowners pass out candy canes to visitors starting at 7 p.m. – and go until they run out.

Babick decided he wouldn’t submit an application for his display — and is still in the process of fighting a ticket the city issued him last year for obstructing the view from neighbors’ driveways.

Because Babick’s display has required the presence of police officers to direct traffic and enforce temporary no-parking zones on Falmouth Street, it was assumed that, should he have submitted a special event permit application, it would have come with a cost, likely between $1,000 and $2,000.