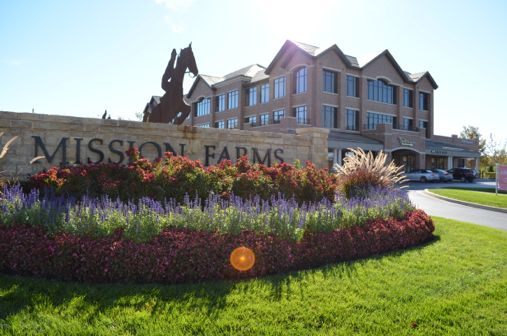 The next addition to Mission Farms, the mixed use retail, office and residential development at 105th and Mission Road ran into hurdles Tuesday that will delay developers for more than a month while concerns voiced by city staff and nearby neighbors are resolved.
Several residents of the Leawood Estates neighborhood which lies to the east of Mission Farms spoke at the plan commission hearing Tuesday to oppose a change in the setback  proposed by developer Doug Weltner.

The next phase of the development is planned to include seven town homes, a new retail/office building and a commercial/apartment building with an attached garage. The newest proposal makes changes in the design that has been approved over the years. The change that brought Leawood Estates residents to the meeting Tuesday is a proposal to reduce the setback on the east side of the development from approximately 490 feet to 250 feet. Residents on Mohawk Lane were particularly concerned about the buildings moving closer to their homes.

City staff had requested a continuation to have more time to work out differences with the developer, which is what the commission ended up doing, even though the developer had resisted that suggestion at the beginning of the meeting and asked the public hearing to be held. Staff had nearly 30 stipulations attached to its report.

Besides the setback issue, staff concerns included the increased ratio of residential into the mixed use. Most of one of the new buildings is slated to be apartments, which changed the original mixed use proportions. The other new building is expected to house new restaurants. Weltner said apartments are planned at 1,100 square feet and the town homes are 2,200 square feet. He said the residential tenants shop and eat in the on-site retail more than the office tenants.
The setback from the main drive of the new retail building also concerned staff and commissioners because it forced pedestrians to walk along a parking area.

Action on the proposal is scheduled for the November 27 plan commission meeting. Commissioners suggested the developer work with Leawood Estates on suitable greenspace solutions for the setback and with city staff to reduce the other stipulations in the intervening time.