A local agency’s recent analysis of data from the U.S. Census provides a sobering assessment of poverty rates in Johnson County. 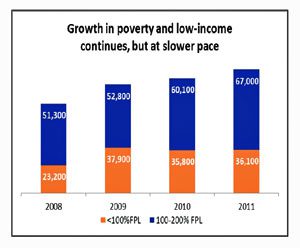 The United Community Services of Johnson County report shows 18.9 percent of Johnson Countians are low income, a category defined as 200 percent of the federal poverty level. That’s an increase of nearly 30,000 people — 38 percent — since 2008.

The report finds that one in 15 Johnson Countians live below the federal poverty level. One in five are low income. Children and young adults, those below the age of 24, are the most likely to live in impoverished or low income situations.