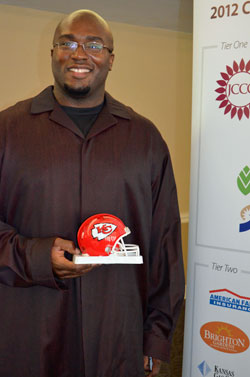 A lot of professional sports players might be tempted to take the money and run into a comfortable and leisurely retirement. But not former Kansas City Chiefs standout Will Shields, who has used his sports retirement to plunge into a variety of business and community activities.

Shields, who played 14 years for the Chiefs from 1993 to 2007, received the NFL Walter Payton Man of the Year Award in 2003 for his work in the Will to Succeed Foundation that he started in 1993.

Shields told the audience at the Northeast Johnson County Chamber luncheon Thursday that Tom Osborne, his college coach at Nebraska, was the one who turned him onto connecting with the community. Osborne sent him out to speaking engagements and taught him that he could bridge a gap with people to make life better.

His foundation in Kansas City has worked with more than 50 charitable organizations and causes. He is proudest of the work with Operation Breakthrough. “It’s the stories of the kids that make a difference,” he said. Shields is now on the board of a bank and operates 68’s Inside Sports, a training, fitness and wellness facility in Overland Park with a goal of making everyone healthy and strong. Their oldest member is 89, he said.

Predictably, the luncheon audience had a few questions about the current crop of Chiefs. “It’s going to be a long season,” Shields told them. The team can’t blame old age anymore because they are young, but still getting injured in games. “They are playing catch up” right now, he said.

Shields had compliments for Sporting KC, both for its marketing and community involvement.

During his 14-year career, Shields made 12 Pro Bowl appearances and had 230 consecutive starts as a Chief. That is a record for Kansas City and places him only behind Brett Favre of Green Bay for most consecutive starts in the NFL.

And his favorite team to play against: the Raiders.