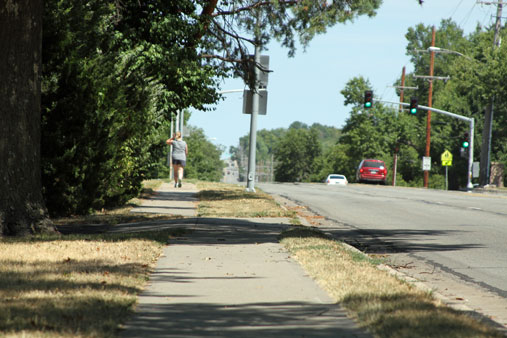 The Prairie Village City Council on Monday passed an amendment to a long-standing — and frequently ignored — policy requiring sidewalks on all city streets, giving residents the chance to vote against the installation of a new sidewalk on their block.

Under the revised policy, if more than 75 percent of residents on a residential block vote against a proposed sidewalk, the city will abort the project. (The new language only applies to residential streets. The policy as it relates to arterial and collector streets — those with the most through traffic — will be addressed in the coming months.) Councilors Ted Odell and David Morrison led the study group that devised the new language.

Since being proposed in August, the amendment to the sidewalk policy has been applauded by those who feel it empowers residents with an important tool to determine their block’s destiny, and derided by those who say it gives too much power to a handful of people who aren’t necessarily acting with the best interest of the city as a whole at heart.

Councilor David Belz put forth the most vigorous argument against the amendment, saying it flew in the face of what residents had requested during the creation of Village Vision, the city’s comprehensive plan.

But a majority of the councilors seemed to agree that the new language struck the proper balance between the connectivity needs of the city as a whole, and the rights of homeowners on individual streets.

“Prairie Village has such a diversity of neighborhoods,” said Councilor Laura Wassmer. “And that’s what draws many people here. I don’t think a one-size-fits-all policy on sidewalks will work in a place like Prairie Village.”

Ruth Hopkins, Charles Clark and David Belz voted against it. Michael Kelly and Andrew Wang were absent from the meeting.

“This is a subject we’ve heard about every two years for the past 20 years,” said Mayor Ron Shaffer after Monday’s vote. “And at least we’re making some movement on the issue.”