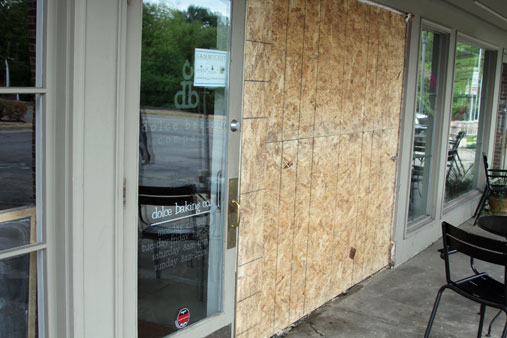 The driver of the Ford 150 pickup that plowed through three hedges and into the front of Dolce Baking Co. at the Village Shops early Monday sustained virtually no injuries in the crash, and the vehicle’s passenger sustained only minor scratches to the face and eyes, Prairie Village police said Monday.

When they arrived on the scene of the accident, police were able to confirm that the driver was not impaired while operating the vehicle.

“The driver was from out of town and not familiar with the area,” said Prairie Village Police Sgt. Byron Roberson. “They just didn’t take into account for the curved road, and jumped the curb.”

Roberson said that, with no skid marks from the tires, it would be difficult for police to determine how fast the vehicle was traveling.

“It doesn’t appear that he ever hit the brakes, though,” Roberson said.