But that’s what Prairie Village’s Tim Dorr found himself up against Friday as he led a group from the cool basement of Leawood Presbyterian Church on 83rd Street into a scorching August night, where he’d set up a partial demonstration of his popular annual display in the parking lot.

As a medley of colors danced around three giant rings, the attendees strained to hear the sounds of the Christmas music coming through the speakers over the deafening din of cicadas. But as the first song came to an end, and the lights pulsed in perfect choreography to the final bars, the group broke into applause.

“We all really love this stuff,” he said earlier in the night, as another Christmas light devotee showed off a new software program. “So we get together to swap ideas and show each other how we do it.”

Nearly two dozen Christmas lighting enthusiasts — some from as far away as Connecticut and Illinois — gathered Friday and Saturday for the Heart of AMerica (HAM) Light Enthusiast Group conference. Over two days, the group heard presentations on computer programs for running complex lighting displays, techniques for creating new and interesting visual effects, and how to collect donations for your display to give to charity.

Dorr, who last year moved his lights-and-music display to the ground of the Prairie Village Pool, first caught the lighting bug in 2005, when he saw a video of an intricate choreographed display on the internet.

Without any background in lighting or engineering (Dorr was in the insurance industry), he pieced together his display, setting it to music broadcast over a radio frequency people could listen to in their cars. Long lines and positive feedback followed. Dorr was hooked.

He started attending an every-other-year gathering of lighting geeks called PLUS , the Planet Christmas Lights Up Symposium. After meeting up with another local lighting enthusiast, they figured they might as well create a mini-PLUS event for the KC area, and the HAM group was formed.

They started with a single day of programming for the event in 2009 before deciding to expand to a day and a half this year.

“You get to hear about how other people are doing things and show them some of the techniques you use,” he said. ” 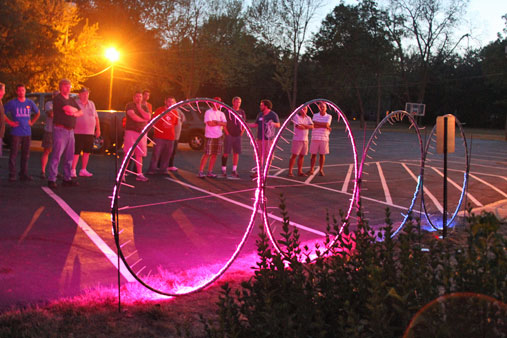