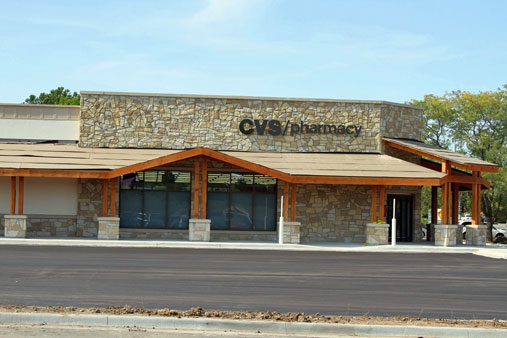 Crews finished all significant construction work on the facility a week and a half ago, though the roof has not been shingled yet. Peter Grassa of Cedarwood Development, which managed the construction project for CVS, said the store should be open August 12. The company is presently training employees and stocking shelves in the new building.

The project was completed with private financing. None of the funds from the Corinth Square Community Improvement District, which levies a 1 percent sales tax on purchases at the center, were used in the CVS construction.

LANE4 Principal Jeff Berg, who is overseeing the redevelopment of the entire center, said residents can expect much of the other work at Corinth Square take a turn in the coming weeks.

“We’re getting ready to finish most of the dirty, disruptive, ugly work and transition into more to the aesthetic improvements,” he said via email. “You should start seeing some dramatic appearance improvements soon.”

Crews are in the process of creating the pocket parks unveiled last September. The installation of new landscaping, however, may have to wait, as drought conditions have made transplanting saplings a risky proposition.