The stress from this summer’s prolonged drought is manifesting itself in a dangerous — and expensive —phenomenon: giant falling tree limbs.

A mature oak in the 2100 block of Cambridge Street dropped a huge limb Friday night at 9:30 p.m., causing damage to two houses. The owner of the house the bulk of the branch’s weight fell on said the limb shook the structure to its foundation, causing cabinets to swing open and even puncturing the ceiling of his living room:

He was being encouraged to find somewhere else to stay while insurance adjusters assess the structural damage.

Saturday morning, a less large — but still significant — branch fell from an oak on 74th Street west of Mission Road, narrowly missing the homeowners’ cars. They dragged it to the curb in preparation to break it up with a chainsaw: 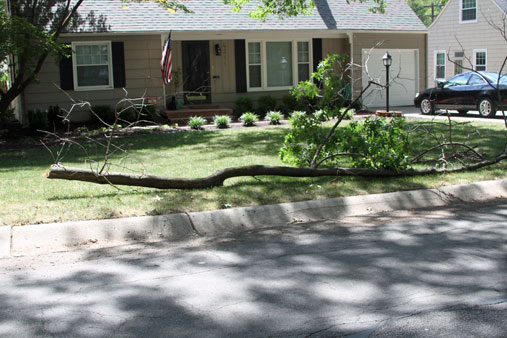 Falling tree limbs can become a common problem when droughts endure, drying out trees and sapping their strength to keep heavy limbs intact. Often, an episode of relatively high winds can be the final straw, stressing the trees to the point of breaking.

To help mature trees fight the stress of drought, arborists recommend applying a thorough soaking to the ground underneath a tree’s branches — not directly at the tree’s trunk. Some people take a soaker hose and wind it around the tree’s branch footprint, leaving the water running for several hours. You can also take a normal hose, leave it on less than full strength, and move it every hour or so until the ground underneath the tree is thoroughly wet. These techniques ensure water reaches the tree’s roots, which tend to begin running around half a foot below ground.