If you’ve known me long enough, you know that I boil my life philosophy down to three letters: ABB.

So it’s been a good week at the Senter house. Last weekend, we spotted an American Goldfinch in the front yard. A couple days later, a Downy Woodpecker made an appearance. And during a jog through Mission Hills yesterday, I spotted (what I’m almost sure was) a Great Blue Heron in the creek just south of Mission Hills Country Club. (If it wasn’t a Great Blue Heron, I think it was a Sandhill Crane): 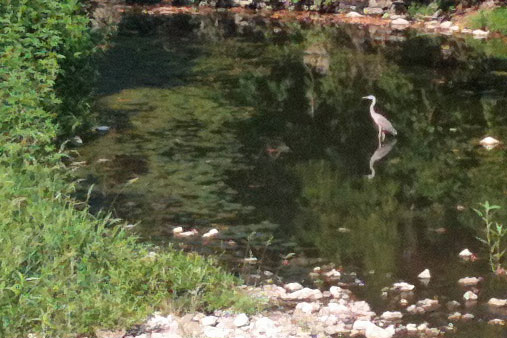 Several minutes later, I saw what I can confidently report was a Barred Owl perched above the creek running along Indian Lane:

Apologies for the relatively low-res photography, but these were snapped hastily with my phone. Anyone else spotted anything unusual these past couple weeks?

With more students and exercisers out on the streets, police offer pedestrians safety tips