Taliaferro, who is now 89, is the city’s longest-serving former mayor, having occupied the office from 1989 to 1999, when current mayor Ron Shaffer was elected. The city council unanimously approved a measure this spring to name the park after him.

The land that would eventually become the park was originally developed by Meadowlake Country Club, which bought the property in October 1965. The club was short lived, though, and the city of Prairie Village purchased the property in 1971. For two years, it used the old country clubhouse as a community center and kept the pool open for neighborhood use. But in 1973, the city torn the clubhouse down and filled in the swimming pool, creating more field space for sports. In 1979, it purchased additional land to create the park footprint that remains today.

Shaffer and Parks Committee Chair Laura Wassmer lauded Taliaferro at the ceremony for the time and effort he gave during his public service to the city. Wassmer reminded the crowd that the city’s Parks Master Plan called for the eventual renovation of the park — similar to the work done on Franklin and Weltner Parks — but noted that the city hadn’t figured out how to pay for the improvements.

After the ceremony, Taliaferro said he and wife Helen, who are both master gardeners, would like to work on the park’s landscaping — though he acknowledged that he’s not able to keep up with work outdoors like he once was.

“We love to work with the flowers and plants, and we’ll do what we can here,” he said. “It does get harder the older you get.” 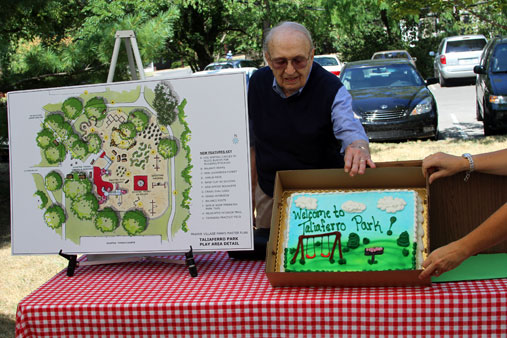