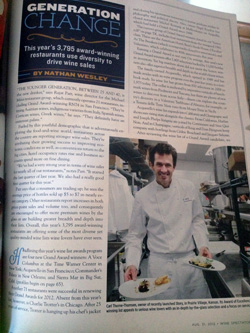 When the August issue of Wine Spectator magazine hits shelves next week, readers across the nation will get a favorable introduction to the Village Shops’ Story restaurant and proprietor Carl Thorne-Thomsen.

Story’s wine list won a Wine Spectator Award of Excellence, an honor that’s been bestowed upon just 10 Kansas eateries. Story was one of just a handful of the 3,800 restaurants to make this year’s Award of Excellence list to get a feature in the magazine. Along with a photo on page 56, the issue features a write up that lauds Story as “another notable newcomer, opened in 2011 by self-taught chef and owner Carl Thorne-Thomsen.” The article says the restaurant “hits the finer points of wine service. [Thorne-Thomsen] stores his whites at 43 F, his reds at 55 F, and uses Spiegelau wineglasses to better enhance his strong by-the-glass program.”