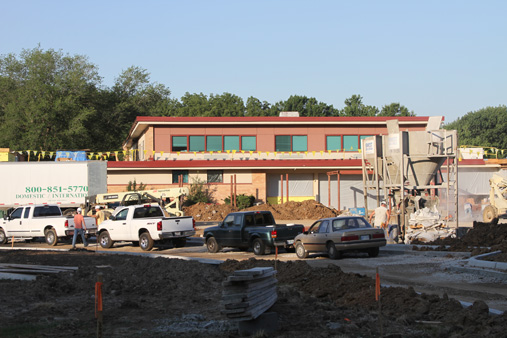 Summer hasn’t been a vacation for construction crews at Indian Hills Middle School.

District spokeswoman Leigh Anne Neal said workers have been putting in extended hours and weekends in an effort to complete the extensive project list scheduled for this summer prior to the start of the 2012-2013 school year August 13.

Those projects include an expansion of the school’s relocated library, a larger office area, and a reconfigured cafeteria and multi-purpose room. Crews are also remodeling the kitchen, adding new classrooms on the site of the former library, and renovating the locker rooms and orchestra room. Outside, the circle drive area is being expanded and crews are putting in a new canopy over the main entrance.

“At this time, substantial completion of this construction work is anticipated prior to the beginning of classes,” Neal said.

But construction won’t stop once the school year begins: crews will continue the development of the new auxiliary gym and hope to have that project complete before next summer rolls around.