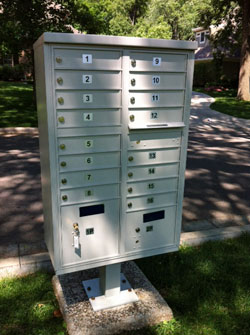 Fairway officials met yesterday morning to start formulating a process for addressing the cluster mailboxes controversy that’s upset many Reinhardt homeowners — though the Postal Service appears to be willing to work directly with the homeowners whose dogs initiated the clusterbox installation in the first place.

Reinhardt organizer John St. Clair said the Postal Service has been meeting with the homeowners whose dogs were deemed threatening to mail carriers.

“The Post Office is giving them a list of options to choose from like putting a mail box at their curb, enclosing their dogs in a physical fence, promising to keep their dogs indoors during delivery hours, etc…,” he said via email. “If the homeowner and the Post Office come to a resolution, then the Post Office will remove the cluster boxes for everyone else.”

Mayor Jerry Wiley has tasked city councilors Tony Liu and Jeff Armstrong, who represent the ward in which the clusterboxes were placed, with developing proposed solutions to the situation that would be agreeable to both neighbors and the Postal Service.

City Administrator Kate Gunja said yesterday’s meeting of the city’s administrative committee yielded no formal recommendations for next steps, but did set the table for Liu and Armstrong to begin working with neighborhood residents on potential compromises. But whether the city will need to be formally involved in the resolution of the issue now seems unclear.

“I do know that the Post Office has met with at least a couple of homeowners already but I don’t know the outcome or if that’s led to a target date to remove the boxes,” St. Clair said. “Things seem to be moving in the right direction…we just need to make sure we see it all the way through.”