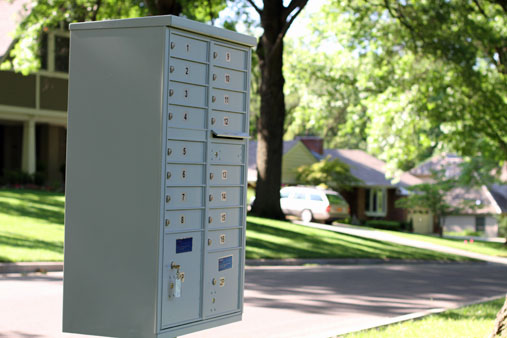 Fairway city officials confirmed Tuesday that the United States Postal Service did not contact the city before installing two “cluster mailboxes” on city easements – a move that likely may not infringe on any of the city’s rights, but does violate “common courtesy,” according to former Fairway mayor John St. Clair, Jr.

City Administrator Kate Gunja said the first the city had heard about the new boxes, located on Reinhardt and Cherokee Streets, was when a resident called to inquire about them late Friday afternoon.

Postal Service spokesman Richard Watkins said the move came after persistent problems with dogs threatening letter carriers. Watkins said the threats came from “a handful of dogs in the neighborhood — not just one or two.” Watkins contends that it was only after failed attempts to work with homeowners whose dogs appeared threatening to the carriers that the service moved forward with the cluster boxes. More than 3,000 letter carriers were bitten by dogs in 2011, according to the service’s statistics.

“The Postal Service is being more assertive when it comes to protecting our employees’ safety,” he said. “There’d be some who suggest you need to have community meetings and meet with the city council and things like that. We don’t have time for that.”

The move has upset many neighborhood residents, who will now need to go to the cluster box to pick up their mail each day. The box on Reinhardt is placed roughly between two properties, with the boxes facing the homes. Neighborhood residents who need to get their mail won’t be able to access the box from the street, and will instead need to walk onto the homeowners’ yards.

Watkins said that the boxes currently in place are temporary versions, and that the service plans to pour concrete foundations to make them permanent soon.

St. Clair said he’s been in contact with Postal Service officials since the boxes were installed, and is working to have the work order to pour the permanent concrete foundations put on hold until current mayor Jerry Wiley has a chance to discuss the matter with the Postmaster.

But Watkins said the service feels some urgency to move forward with the new boxes.

“If you’re running a construction zone, you don’t wait until a brick drops on someone’s head before you require hard hats,” he said.