Prairie Village is losing a resident who has become one of the Kansas City area’s most accomplished art administrators. 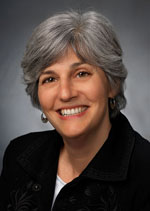 The Nelson-Atkins Museum of Art announced earlier this month that Margi Conrads, its American Art Curator, has accepted a position as the Deputy Director of Art and Research at the Amon Carter Museum of American Art in Fort Worth, Tex. Conrads had been with the Nelson for 21 years.

During her time, she oversaw the reinstallation of the American Galleries at the Nelson as well as a scholarly publication, The Collections of The Nelson-Atikin Museum of Art: American Painting to 1945.

“This is a wonderful opportunity for me as a professional, and I am eager to begin my new position at the Amon Carter,” said Conrads in a statement. “But I have truly enjoyed my time at the Nelson-Atkins. I look forward to future partnerships and collaborations between the museums.”

Conrads’ husband David is a writer who worked with baseball legend Buck O’Neil on his book I Was Right on Time. They raised two children who attended SM East.

She expects to begin her new position in September.