Pop quiz, Villagers. What do the following people have in common? 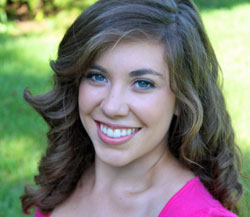 A: As of the end of this summer, they will all be graduates of the Interlochen Arts Camp, one of the most renowned programs in the world for aspiring young artists.

A talented vocalist, Kaufmann learned earlier this month she had been accepted to the prestigious camp, and will be heading north this summer to study Musical Theatre. She starred as Rose Alvarez in SM East’s production of Bye, Bye Birdie in January, and will be part of the cast of this summer’s Theater in the Park production of “Legally Blonde.”

Approaching its 85th season, Interlochen brings up to 3,000 young artists to its Michigan campus each year for a three-week session organizers describe as an “explosion of creativity.” Attendees come from all 50 states and more than 40 countries. In addition to collaborating on hundreds of presentations and performances, the students learn from guess artists like Bob Dylan, Branford Marsalis, Lyle Lovett and B.B. King.

Kaufmann is the daughter of Joni Cobb and Scott Kaufmann of Mission Woods.