Construction crews over the weekend finished installation of a black chain link fence by the new trail between Porter Park and 71st Street along Tomahawk Road — but negative feedback from a number of residents who live near the trail is prompting some to look into how precisely the material for the fence was selected.

Marianne Noll, wife of Prairie Village Ward 2 Councilman Steve Noll, posted a new sign along the fence advertising the times of the next Parks and Recreation Committee and City Council meetings: 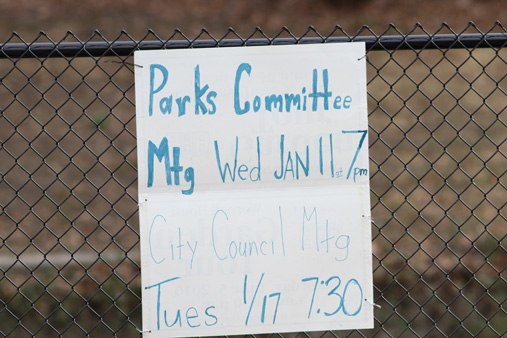 “I have a choice not to walk along Tomahawk, but the residents who live across from the trail will be forced to look at the fence every day,” she said. “If a safety barrier is necessary why couldn’t  it be more aesthetically appealing and located at the top of the gabion baskets (the top of the retaining wall for Brush Creek) for the people who look out their window at it daily.”

Another council member had received nearly 20 negative calls and emails about the fence.

The Prairie Village City Council voted in October to approve the materials for the Brush Creek trail project, but the vote was part of a larger set of resolutions on parks projects, most of which were change orders for Weltner Park renovation. Ruth Hopkins of Ward 2 and David Morrison of Ward 5 were the two council members to vote against the issue.

An overhead design rendering for the project presented to the council before the October vote lists “black vinyl chainlink” as the material for the fence — but no elevation drawings with visualizations of what the fence would look like from the ground level were included in the packet they received prior to the vote.