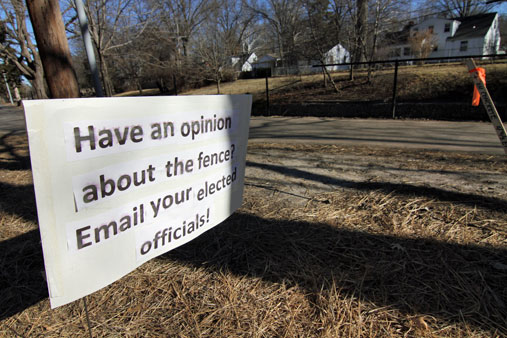 The fence being built along the new Brush Creek trail from Porter Park to 71st Street appears to have ruffled the feathers of some of the Prairie Village residents who live in its immediate vicinity.

Late last week, someone (we’re still trying to track down who — shoot us an email if you know) planted a sign along the trail near 74th Street encouraging people to contact elected officials and city staff with their opinions about the fence. The sign lists the email addresses for four city council members, the mayor, the city administrator and the public works director.

Bruce McNabb, the aforementioned public works director, tells us that the fence was part of the original plan for the trail the City Council approved in April 2011. Though final costs are not in, McNabb estimates that the whole trail installation project will cost approximately $125,000. Approximately $20,000 of that will be related to the fence installation.

The project is expected to be complete in the coming days.