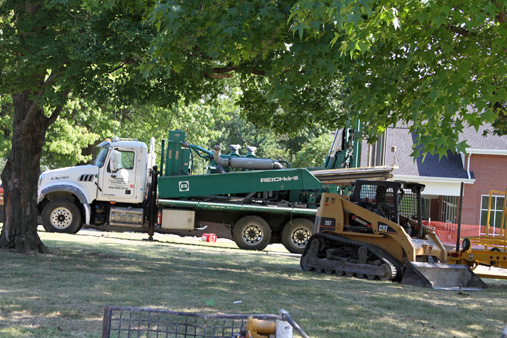 No, that’s not another pool they’re drilling on Prairie Village city grounds.

Work has begun along Mission Road on a new geothermal heating and cooling system that will serve City Hall. The system functions by using water in wells drilled deep below the surface to conduct warm and cold air that is circulated through the city buildings. Here’s a description from the city’s project page:

The city council approved the project earlier this year after somewhat extensive debate.

The project, which will replace the city’s aging traditional heating and cooling system with a modern “green” technology, costs a total of $1.36 million.

But because the city is receiving $400,000 in funding for the project from the American Recovery and Reinvestment Act, the total cost to Prairie Village taxpayers is $880,000. The ARRA grant money coupled with a $53,500 projected annual saving on utility bills convinced the council the new system made the best economic sense.