We regret to admit that amid all the election hubbub, the fact that SM East’s theatre department is putting on their spring play this weekend escaped us.

The theatre crew will put on its third and final performance of “The Government Inspector,” in the Dan Zollars Auditorium at SM East at 7 p.m. tonight. It’s a satirical play originally published in Russia in 1936 that follows the reactions of a group of corrupt city officials after they hear news that an inspector from the government will be coming to do an undercover investigation.

If you miss the SM East production but are still craving some theatrical culture, you might want to check out the creation of 1963 SM East grad Kip Niven. Niven and a group of local thespians have put together a project called Equity Actors’ Readers’ Theatre (or EARTh, for short).

The group, made up of some of Kansas City’s most experienced professional actors, produces dramatic stage readings of what Niven says are “sadly underperformed plays.”

The group will be performing Paddy Chayefsky’s GIDEON at 7:30 p.m. Monday in the auditorium of the Music & Arts Building on the at St. Teresa’s Academy, 5601 Wyandotte, KCMO. Admission is free, though donations are accepted. 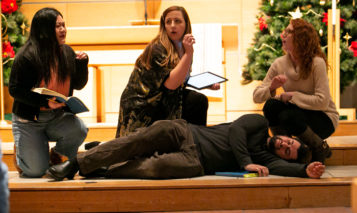