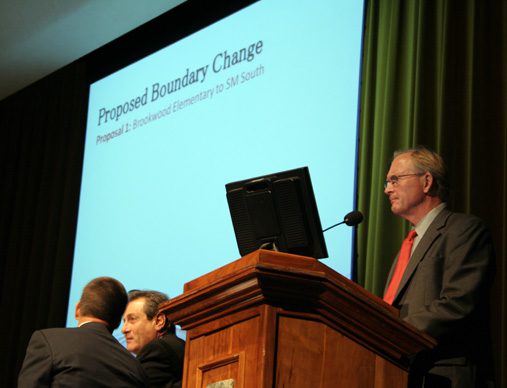 Today we present the first responses to our questionnaire for the Shawnee Mission School Board at-large candidates. Question one concerns the atmosphere surrounding last fall’s school closure debate.

The tone during last fall’s debate about closing schools and changing boundaries was frequently contentious and divisive. What do you think the administration and/or the school board could have done, if anything, to minimize the negative atmosphere that surrounded those discussions?

There is a great deal that should be done differently going forward. First is the fundamental recognition that these are local schools, owned by local people. The Board AND the administration serve the educational interests of all residents. They govern and administer on behalf of the real owners.

I think that was missing. The process should have begun with the owners detailing their expectations for schools. This should have been done months prior to the convening of a working group to discuss boundary changes and closures. The District needs to make much more effort to avoid pitting residents and schools against each other.

“Listening to owners” first would have allowed residents to define a common “end game” and have a larger appreciation for the District realities. It would have brought to the surface needs

Administrators could also openly put the fiscal outcomes into the mix. As it was, none of this was done before hand. People were left to react and defend important principles in a competitive setting.

The Board also must recognize that owners have rights. For example, a city making a change in the zoning codes has high standards of showing the impact on residents. Cities must convene numerous public meetings in very open sessions that allow “owners” to have real give and take. The school closing and boundary changes proposals outlined by the District lacked this openness.

The district’s ongoing budget problems required action, but the process was flawed. Community members feel that their voices were not acknowledged.  The district provided a list of proposals without a comprehensive discussion of the district-wide issues being considered and the trade-offs being decided.  Stakeholders feel their questions, concerns and potential recommendations were ignored.

The administration made the mistake of assuming that information presented in poorly attended spring budget forums had been widely disseminated across the district. A greater effort should have been made to clearly communicate the magnitude of the upcoming budget shortfalls as well as the specific cuts being considered.

District patrons should be involved in setting specific criteria for solutions to be used in resolving future deficits (for example, district patrons feel strongly about maintaining current teacher:pupil ratios). The Board should actively recruit community members to represent all areas of the district to participate in both open-ended surveys and a truly representative task force to develop a list of proposals that meet the criteria. In addition, the Board must find a way to discuss potential solutions to the district’s funding shortfall in a format that encourages the give and take of discussion, rather than the public hearing format in which patrons’ speeches are delivered without a response from the Board.

People support what they help create. I would have taken a different approach in developing the recommendations so that people would have hopefully been more supportive.  I would have followed a model that the District used several years ago the last time we went through school closings, boundary changes, and the bond program. At that time, I served on the District’s Boundaries and Facilities committee. The group (about 25-30 people) was composed of administrators, patrons, parents, politicians, and teachers. We developed, discussed, and revised numerous recommendations. These meetings were open to the public and by the time we were through, we had developed a well thought out and extensive list of recommendations that had broad-based support.

Since the beginning of this campaign, I’m the only candidate that has promoted this idea, and I would work to ensure it is adopted. Going forward, as a Board Member, I would utilize a similar type of group to develop and analyze potential recommendations that affect major policy areas within the District. It’s important to note that this group should not be micro-managing daily District operations but should operate as a policy advisory group.

As an experienced business consultant, I have put together numerous stakeholder groups to assess various business situations and develop solutions.  As an experienced politician, I nominated numerous citizens to serve on standing city committees and special taskforces. Those groups worked well because people brought their ideas to the table and had a chance to debate an idea’s merits before it went to the full corporate board in the business world or the elected body in the political world. I would support similar efforts and would work to ensure that citizens of the District had many opportunities to debate their ideas before a vote was ever taken. Again, people support what they help create!

Tomorrow we’ll have the answers to question number two:

Over the past two years, the district has cut $20 million from its budget, and is currently seeking input from patrons about where to make future cuts. Is it realistic to think the district can make ends meet without further increasing class sizes? If not, what cuts can be made to minimize the impact on the classroom?