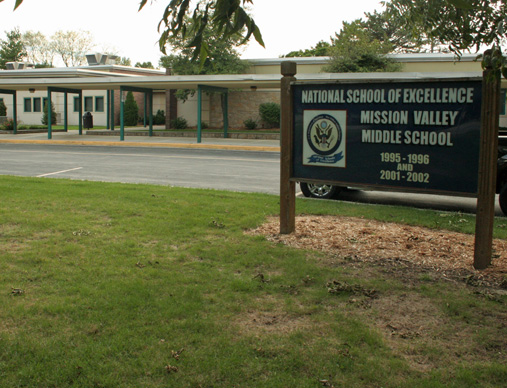 Claiming the state’s budget crisis is forcing the board of education to consider measures that would destroy successful public schools, a group of ten families filed a lawsuit against the Kansas school funding formula on Friday. At issue is the funding formula’s cap on the Local Option Budget, a provision that allows communities to use property taxes to bolster the funds available to school districts.

The plaintiffs made clear that the case, which was filed in federal court, aims to take action against the state, not the Shawnee Mission School District: “This is not an attack against the District or its personnel,” a press release put out by the plaintiffs said. “It is against the state law that currently forbids them from protecting their children.”

Though the plaintiffs had been involved in the Save Mission Valley group, not everyone in the group in behind the lawsuit. Still, Save Mission Valley organizers sent an email to members asking them to write the Shawnee Mission board of education and encourage them to delay a vote on closing Mission Valley until the court had weighed in on their case: “The Board and District should not need to proceed with the divisive and harmful school closure plans if the court permits area residents to vote to approve a modest tax increase to avert the school funding crisis,” the message said.

The district issued a statement after the filing noting that it was not a party to the suit, and that, “﻿﻿The lawsuit is currently under review by the district and its counsel. At this time, it is not clear how or if the filing of the lawsuit will affect the board’s agenda or its decisions on Monday night, December 13, 2010.”

The board of education meeting is scheduled for 7 p.m. tonight at SM West.

See the full press release on the court case after the jump.

Concerned Parents and Citizens Are Forced To Sue to Protect Their Constitutional Rights and Prevent Local School Closures.
The Shawnee Mission School District is in a budgetary crisis having already made $20 million in budget cuts with more on the way. The District plans to close schools to save $3 million even though that plan will destroy successful neighborhood schools. A vote to close Mission Valley Middle School, among other harmful and disruptive proposals, is scheduled for December 13, 2010.

This legal action is an effort by the parents and citizens to help the District obtain the necessary funding it needs to provide the best education possible to all of its students across the entire district. This is not an attack against the District or its personnel: it is against the state law that currently forbids them from protecting their children.

Case Highlights:
1. The State Prohibits Local Self-Help to Avert the School Crisis. Concerned parents and citizens want to band together as a community to avert the crisis, but the State prohibits them from doing so by forbidding them from collectively pooling their own resources through voluntary local taxation. This state prohibition is known as a Cap on the Local Option Budget. Because Johnson County citizens oppose closing Mission Valley Middle School and several others on the chopping block, they challenge the constitutionality of the LOB Cap that Kansas law places on the amount of money by which citizens within a local school district may voluntarily supplement the education funds from the state.

2. Participatory Democracy at its Finest: Community Bands Together To Protect Neighborhood Schools and Protect Public Education For All Area Kids. In a nation founded on liberty, self-government, and local initiative, and at a time when America’s educational system is widely recognized to be in financial crisis and requires substantial improvement, it is alarming that any State would prohibit its communities from improving their schools through collective civic action. But the State of Kansas has done just that. Ironically, while Kansans are free to spend unlimited amounts of money on junk food, video games, and other threats to the best interests of their children, the State bars them from democratically taxing themselves to improve their kid’s education!
This lawsuit represents the kind of participatory democracy on which this country was founded.

3. The Voters Should Decide How Much Education They Can Afford, Not the State.
Through the LOB Cap, the Kansas legislature essentially tells plaintiffs that they may not raise their own taxes to improve their own school system even though that is what the voters in the Shawnee Mission School District want to do and have repeatedly done.
4. Unless the Cap is Removed, Kansas Sets Area Kids Up for Failure. At a time when it is widely predicted that our kids will have to shoulder the staggering national debt during their adult years, the state legislature strips children of the tools they will need to earn a decent future living. The LOB Cap prevents our children from achieving an education necessary to be competitive in a global economy. Better public education is the stepping stone to better jobs and prosperity.

5. The Cap Is Unconstitutional Because It Tramples Individual and Collective Fundamental Freedoms. The LOB Cap strips plaintiffs and local citizens of their fundamental freedom to use their own money to improve the public education of their children. The LOB Cap abridges plaintiffs’ fundamental liberty and property interests guaranteed by the 14th Amendment of the United States Constitution.

6. The Cap Violates Liberty Rights. Since 1923, the Supreme Court of the United States has clearly protected the right of parents to control and participate in the education of their children.

a.The Cap Violates Property Rights. The Supreme Court also protects the fundamental right to make decisions about the use of his or her own property, especially to aid, nurture or care for this or her own children.

b. The Cap Violates Equal Protection. The State discriminates against the Shawnee Mission School District. It intentionally underfunds the District. The state allocates some of the lowest funding in the State to the District, and then adds insult to injury by prohibiting local residents from correcting this gross unfairness and financial imbalance. Plaintiffs merely want the right to voluntarily tax themselves to achieve equality with better funded districts in the state.

7. The Lawsuit seeks to Stop the School Closure Plan and Declare the Cap
Unconstitutional: The LOB Cap has caused the Shawnee Mission School District to adopt a harmful and disruptive school closure plan. Plaintiffs ask the court to permanently stop enforcement of the unconstitutional ceiling on local spending for public education. They hope to provide their kids with the necessary learning conditions proven to correlate with successful student performance, including higher standardized test scores, which the LOB Cap irreparably harms unless it is immediately stopped.
Plaintiffs hope that the Shawnee Mission School District votes against the school closure plan on December 13th —or at a minimum waits to act on that proposal until this lawsuit is resolved. If not, plaintiffs will sue the District officials too, and move to stop the school district from enforcing the school closure plan.

8. The Attorneys Include Leading Constitutional Law Scholar– Plaintiffs are represented by Tristan Duncan of Kansas City-based Shook, Hardy & Bacon, LLC, Professor Laurence H. Tribe of Harvard Law School, and Jonathan Massey of Massey & Gail of Washington D.C. Laurence Tribe is a leading constitutional law scholar having argued over 30 cases in the Supreme Court and until this December 3, was the Senior Counselor for Access to Justice in the U.S. Justice Department. Jonathan Massey specializes in constitutional and appellate work.