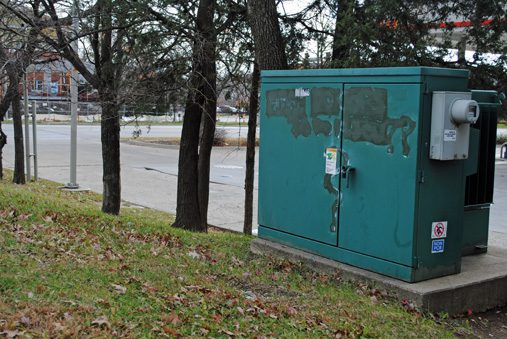 Year to date, the city has recorded 65 graffiti incidents, and has had to spend $27,000 on removal. That’s more than three times the rate the city saw in 2009. Moreover, the rash of incidents that began in late October has forced public works to devote resources to graffiti removal that would normally be focused on maintenance tasks.

“We really are having to take time away from doing other things to work on clean up,” McNabb said.

Capt. Tim Schwartzkopf said Prairie Village police believe the same individuals are behind all the incidents. He encouraged residents to be diligent in keeping an eye out for the culprits.

“If you see someone hanging around after hours and you get the feeling that something isn’t right, give the police a call,” he said. “I’d rather have ten calls that turn out to be a false alarm than for us to miss the one time that we could stop another incident from happening.”

Anyone with information about the string of graffiti attacks is encouraged to call the police department at 913-642-6868.