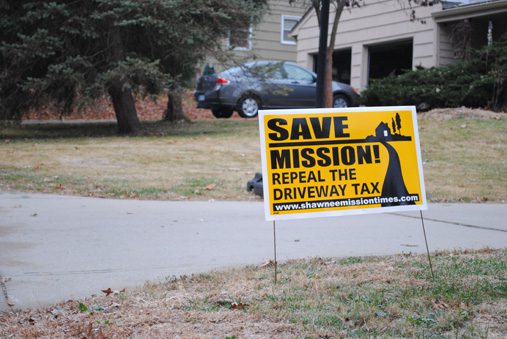 Currie Myers, a former Johnson County sheriff who now runs a conservative Web site called The Shawnee Mission Times, had printed off a slew of yard signs protesting the city of Mission’s recently passed Transportation Utility Fee. Commonly referred to as the Driveway Tax, the controversial initiative assesses a fee to each Mission homeowner and business based on how much traffic their properties produce. The average homeowner will pay just over $70 a year. The projected $1.2 million raised annually by the fee are to be used to fix and maintain roads.

In an article on his site, Myers chastised the Mission city council for passing the fee:

When tax increases reduce economic growth or create incentives for taxpayers to evade taxes, they bring in less revenue than a static (purely accounting) projection would predict. Quite frankly, the economics behind your decision will produce just the opposite of what you think it will produce. It will produce less revenue into the public coffers, especially over time.

The “Save Mission” signs have shown up outside a number of homes along Roe Avenue.