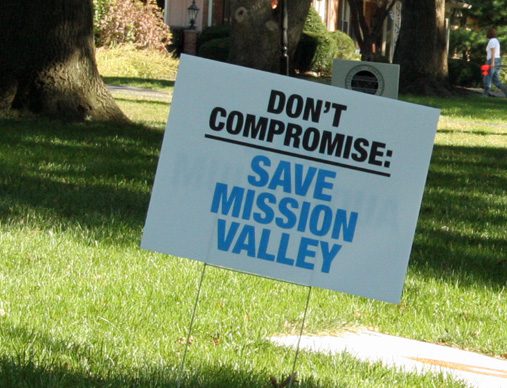 It’s been a grueling seven weeks for the parents who organized the Save Mission Valley group. They’ve researched. They’ve distributed yard signs. They’ve shown up in force at community meetings. But with just five days left until the board of education’s deciding vote on the school’s fate, there’s not much left to do but wait and see.

Save Mission Valley leader Michelle Trouvé said yesterday that the group would be reaching out to individual members of the school board in the days leading up to next Monday’s vote, but otherwise, their campaigning is done.

“We’ve sent out our final argument, and we feel that the evidence we’ve presented is compelling,” Trouvé said.

As you might expect, there’s been a fair amount of head counting — but since only one member of the board of education, Cindy Neighbor, has spoken out publicly in support of keeping the school open, Trouvé doesn’t have a very good sense of where a number of the board members stand. She said she thinks it’s likely that board president Deb Zila and vice president Craig Denny would vote to close the school.

“We know we have one vote. We’re looking for three more,” Trouvé said. “I’m hopeful we’ll be successful.”

The group last week canceled a planned “park in” demonstration. They initially called on parents to pull through the Indian Hills circle drive and parking lot during peak pick-up and drop-off hours to illustrate how much traffic a converged Mission Hills and Indian Hills student body would generate. But several of the parents in the group raised concerns that such a demonstration would end up creating a number of the safety hazards — if only for a couple of days — that Save Mission Valley is hoping to avoid by keeping the school open.