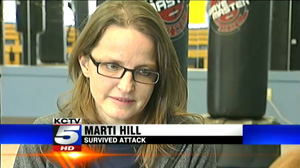 Six weeks after she was attacked in her Fontana Street home, Marti Hill was joined by friends and family members Saturday at Traditional Martial Arts and Fitness in Overland Park for an event celebrating her resilience and helping raise money for her medical bills. The event drew dozens of supporters, as well as the local media.

Hill told KCTV 5 that she credited the physical fitness she acquired from taking kickboxing classes at TMA with her ability to survive the attack.

Hill’s accused assailant, Brian Pennington, who is charged with attempted first-degree murder, is set to make his next appearance in court Dec. 21.