They’re both 6-1. They’re both at the top of the Shawnee Mission and Sunflower League standings. And on Friday night, they’ll be going head to head under the spotlight of area TV cameras. 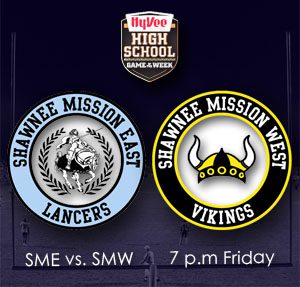 This weekend’s game between SM East and SM West has drawn enough attention around the Kansas City metro that it was named the Hy-Vee High School Game of the Week. The game, which starts at 7 p.m. at SM South stadium, will be broadcast live on Metro Sports (Time Warner Cable channels 30 and 1030).

The Vikings bring a league-leading six game winning streak into the contest, and have already claimed at least a share of the league title — their fourth in six years. They’re anchored by a solid defense that tends to limit opponents to 20 or fewer points. West defensive back Denzell Simpson leads the league with 79 tackles.

So there’s a lot going on here. Which is probably why the game is also in the running for KMBC‘s and Fox 4‘s Game of Week status. (Click the links to vote).