The months-long renovation of Franklin Park is nearing its end — though whether the contractor will be able to finish by the end of October as hoped remains to be seen.

Prairie Village interim director of public works Keith Bredehoeft told the city council at its last meeting that the contractor was having issues with a supplier who was to provide materials for some of the pre-fabricated structures being installed in the park, which could push the completion date past October 31. However, the city’s contract with the builder has provisions that provide incentives for completion by the scheduled due date.

More photos of the renovations after the jump.

The old concrete track has been replaced with an eight-foot-wide asphalt track designed to be more accommodating to runners and walkers:

Though the water hasn’t been turned on and it’s currently filled with leaves, the new play stream is nearly complete:

And the baseball diamond has gotten a facelift, with a new backstop and re-leveled infield. 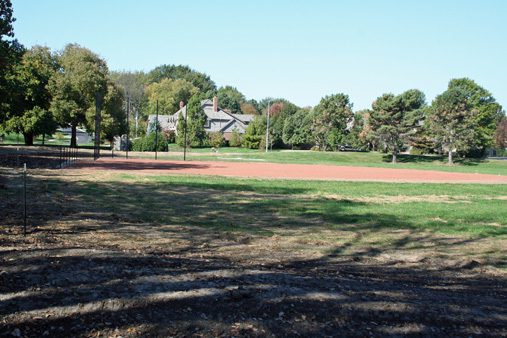