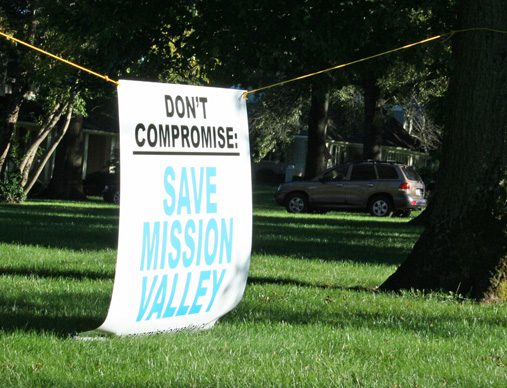 If the Shawnee Mission School District Board of Education approves a proposal to close Mission Valley Middle School for good at the end of this school year, it won’t be for lack of organization on the part of the parents who oppose the idea.

The group of parents who’ve launched the “Save Mission Valley” Web site and distributed the yard signs popping up throughout the area are conducting a vigorous research campaign, trying to poke holes in the rationale the district has put forth for the closing.

Meridith Bihuniak, who has three children at Corinth Elementary and one at SM East, got involved with the group soon after it formed, and now sits on its strategic committee. She said the group has split into 14 different task forces, each charged with reviewing a different part of the data from the proposal or investigating a particular area of possible impact. One task force is looking at the academic records. Another is exploring the potential impact on home values throughout the area.

“We want the community to come together and say, ‘You’re making a wrong decision,'” Bihuniak said. “So our strategic committee is building one really big document with all of the evidence we’ve accumulated that the rationale for the proposal is flawed — and we’ll be presenting what we find.”

Asked if she thought the group had a good chance of influencing the Board of Education, which will cast a vote on the issue November 8, Bihuniak paused.

“That’s a good question. And it’s really hard to say,” she said. “We need four of the seven votes on the Board of Education. I think they are reasonable people. And they are listening to us. But you just don’t know.”