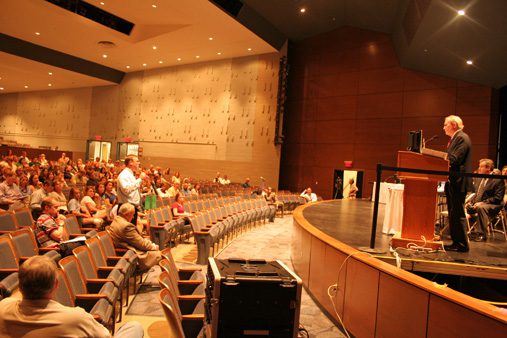 Shawnee Mission School District superintendent Gene Johnson on Tuesday bore the brunt of the frustrations of dozens of Brookwood Elementary parents who until last week had assumed that their children would be headed to Mission Valley Middle School and then Shawnee Mission East.

In the first of the district’s 11 scheduled community meetings to discuss the proposed school boundary changes and closings, the parents in attendance in the SM East auditorium literally stood united in opposition to the plan to move Brookwood from the SM East into the SM South attendance area.

Attorney Steve Bledsoe was the first parent to address the members of the Board of Education after Johnson concluded his presentation — and delivered a courtroom-esque argument against the proposal that drew loud cheers from the crowd.

“I have two children at Brookwood, one at Mission Valley, and one on the way,” Bledsoe said. “This is an important, and an emotional, issue for my family.”

Stating that his family had chosen to move into their home so that the children could attend both Brookwood and East, Bledsoe rejected the board’s reasoning that moving the Brookwood students into the South area would create equal access to high-level programming at schools throughout the area. He then asked those parents in the crowd who wanted to have their kids attend SM East to stand up; all but a handful of those in the audience rose to their feet. 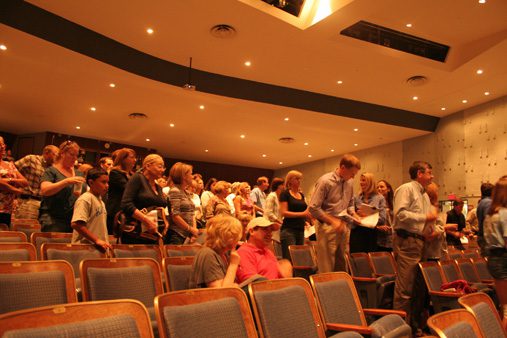 Before the public comment section of the evening, Johnson told the crowd that the proposed boundary changes would create efficiencies that will save the district needed funds. He said that even though the district had cut more than $20 million in spending over the past two years — including the elimination of 100 teaching positions — the district had been “deficit spending” this year, dipping into $6 million of its reserve funds.

A meeting to discuss the proposal to close Mission Valley Middle School is scheduled for October 4 at SM East.