The Mustangs of Mission Valley Middle School may be heading north to pasture.

Unless the Shawnee Mission Board of Education diverges from a plan announced at its meeting last night, Mission Valley will close its doors for good at the end of this school year, with the majority of its current student moving up Mission Road to Indian Hills Middle School. An additional proposal would move Brookwood Elementary into the Indian Woods Middle School and Shawnee Mission South attendance areas, effectively cutting off the southern part of the current East district.

The announcement came as part of 11 proposed school closings and boundary changes that superintendent Gene Johnson said were necessary to increase efficiency in a district that has steadily lost student population. At its largest, in 1971, the district had 45,702 students. Enrollment figures from 2009 showed that the student population had dwindled to 27,748. 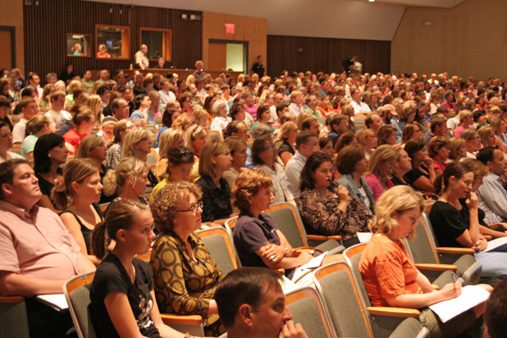 The announcement that Mission Valley would be closing was greeted with audible murmuring for the crowd, which had remained mostly silent during the presentation of the other proposals.

Johnson has three sessions scheduled this week to meet with PTA presidents as well as city and business leaders to discuss the proposals. The district will also be planning a series of public forums to seek community input on the plans before they come up for a vote on November 8.