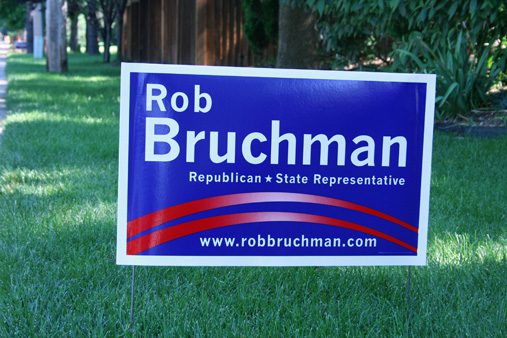 Remember how last week we were noticing that Kansas House candidate Rob Bruchman had managed to get a whole mess of yard signs planted in high-traffic corridors throughout the area?

Well, an Overland Park man says that at least one of those signs was planted without approval.

The Pitch reported last week that OP resident Paul Hemenway found a Bruchman sign planted in his lawn at 97th Terrace and Nall Avenue even though he had never requested one and no one with the Bruchman campaign had contacted anyone who lived in his house.

Bruchman tells shawneemissionpost.com the incident was a simple mistake. “Our records indicate that we had a sign request from that household, but it appears that it could have been an error,” Bruchman said. “We never did receive a sign removal request. But anytime we hear that a sign is in the wrong place, we’ll send a volunteer out to remove it that day.”

Bruchman said that aside from Hemenway’s yard his campaign has only received one other complaint. In that instance a volunteer had planted a sign on the wrong side of the street.

However, in the comments section of the Pitch story, Hemenway said he had spoken “with the Republican party of Johnson county and they said they have had numerous complaints about him putting out signs without permission from the property owner.”

“We may have had a couple of calls, but if it was anything more than that, I probably would have heard about it,” Barker said.

We’ll update this post if/when we hear anything new.