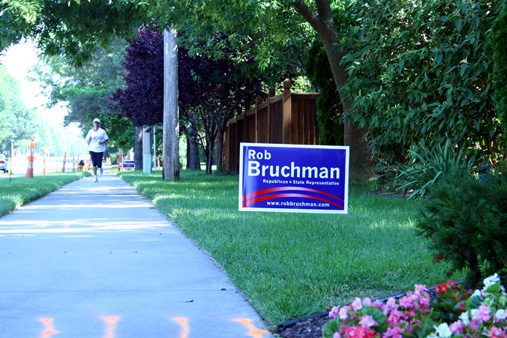 (Yet another shawneemissionpost.com story filed under “political yard sign observations”…)

Rob Bruchman dominates yards. The Shawnee Mission East and KU Law School graduate is currently making his first foray into elective politics by running to succeed Kevin Yoder (for whom Bruchman was once a legislative intern) as the District 20 state representative. And his signs are everywhere.

Along Mission Road between 95th Street and 103rd Street — a one mile stretch — 11 houses have Bruchman for State Representative signs planted in their turf. He’s got similarly dense representation along Lee Boulevard, 95th Street, and a number of other pockets throughout the area.

So what does Bruchman know about maximizing visibility with yard signs that his former boss Yoder doesn’t? Well, it could have something to do with the fact that Bruchman has deep roots in matters of the mulch. The business he started as a freshman in high school (referenced on his Web site) was a lawn mowing service; it’s probably nice to have a Rolodex full of former lawn mowing clients when you’re asking people to plant signs.

If Bruchman were to take the Republican nomination in District 20 over fellow candidates Stephanie Sawyer Clayton and Matthew Webb, he’d likely face former GOP-consultant Rob McKnight, who recently filed for the seat as a Democrat, in the general election in November.